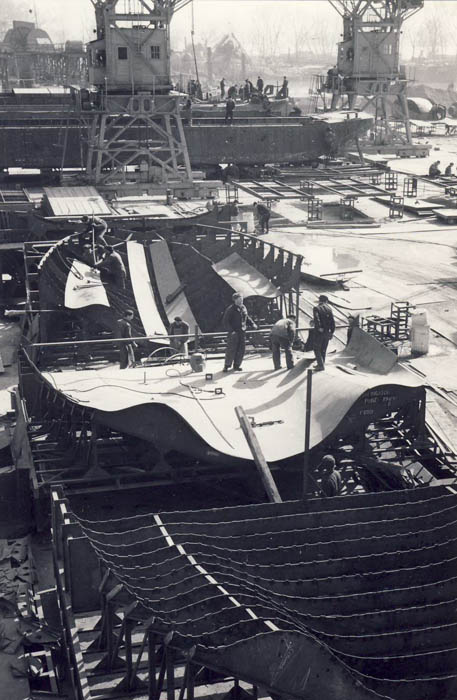 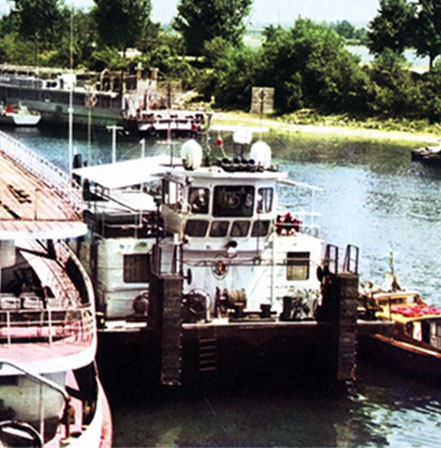 The beginning that wrote history

Before the official opening, near the future location of the Shipyard, the first war ship of the Romanian Principalities was launched on August 2nd in Giurgiu, under the name of “Romania” in the presence of Alexandru Ioan Cuza, War Minister. The ship was bought from Vienna by Nicolae Ciocan in the year 1857 and turned into a military ship.

The official inauguration ceremony of the ship “Stefan cel Mare” (Stephen the Great) also took place in Giurgiu, on February 19th 1869 as well as the baptizing of the ship “Fulgeru“(Lightning) that took place on June 15th 1874, ceremonies at which Carol I (the 1st King of Romania) attended.

According to official registrations kept in the collective memory of the ex-workers from Giurgiu Shipyard, the first workshop was built in 1897. In the first monograph of Giurgiu City, in was mentioned, that the Shipyard “was made” in 1910, for “ship repairs”. It is known that with 1910 the shipyard repairing activity started extending. The shipyard evolution knows a high production development and a diversity of different types of ship repairing works that can be performed on the shipyard platform.

If in the beginning, the shipyard was a small workshop for the few available boats on Danube; In 1973 the shipyard knows its first stage for developing and modernizing for the existing facilities, but also investing in new production facilities and halls with all the necessary equipment for building new ships. The shipyard area has been extending to 280.000 square meters.

During 1979-1980, the shipyard met a new phase of development and modernization due to an increase demand in production of ships but also repairs of the older existing ones. The ships hull assembly room is endowed with a LOGATOME reel equipment, used for semiautomatic welding and for the ships outfit, there were built assembly rooms with electrical workshops, piping, ironware and carpentry, all endowed with modern manufacturing equipment.

The most important facility was built in 1985, which is the vertical transfer equipment called the syncrolift.. This equipment was designed and built with the purpose of launching and docking maritime and inland ships.

During this period there were build different types of vessels, some fully equipped such as: Pushers 2*300 HP, 2*800 HP; Floating pumping stations; Floating cranes; Technical ship such as: Dredges and Split barges, but also CASCO hull such as Fishing vessel, Maritime coastal vessel, Port container ships, etc.

After 1989 the shipyard is going into a severe economic crisis, due to political and economical conjunctures. In 1996 the administration of the company changes and in 1998 the new administration declared bankruptcy.

With the founding of Giurgiu Free Zone, the shipyard was divided and sold to various investors. The investors used the shipyard facilities as storage space for materials and finished products.

Between 1999 and 2001 there have been two attempts to restart the shipyard but both have failed. Until April 2002 the shipbuilding production has been completely stopped.

In May 2002, a Romanian investor buys the assembly halls, the railing transfer area of the ships and the syncrolift platform for launching and docking the ships, with 100% Romanian private capital, being renamed Shipyard ATG Giurgiu.

In the first period of 2003, started the repairing process of the ship departments, hulls and buildings for the new production facilities in order to build/ delivery inland and sea-going vessel at “CASCO” or “Turn-key” level but also raising the ship repairing activity.

From 2002 till now, the management invested over 7 (seven) million Euros in high-tech equipment and modern development.

...and we continue to write history